What is Creation Time?

In 1989 the Ecumenical Patriarch suggested that 1 September, the first day of the Eastern Orthodox Church year, should be observed as a day “of protection of the natural environment”. Ten years later the European Christian Environmental Network (ECEN) widened this proposal, urging churches to adopt a Time for Creation stretching from 1 September to the feast of St Francis on 4 October and this was endorsed by the 3rd European Ecumenical Assembly in Sibiu, Romania in 2007, which recommended that the period “be dedicated to prayer for the protection of Creation and the promotion of sustainable lifestyles that reverse our contribution to climate change”.

Since 2008 Churches Together in Britain and Ireland (CTBI) has compiled a programme of resources to encourage and assist churches to observe Creation Time. These include suggestions on a variety of ways in which churches, groups and individuals could choose to focus on a creation theme at this particular time of the year. Pope Francis made the Catholic Church’s warm welcoming of the season official in 2015, using powerful words last year to encourage participation in the ecumenical Season of Creation:

“This is the season for letting our prayer be inspired anew by closeness to nature…to reflect on our lifestyles…for undertaking prophetic actions…directing the planet towards life, not death.”

We have known for decades that this time will come. We have been made aware of the rapid extinction of beautiful and unique creatures. Thanks to the honest and disciplined work of climate scientists, we know (unless we fall victim to fake news) right now, that our lifestyle is unsustainable, and our dominant philosophy of ‘permanent growth at all cost’ carries the seeds of the destruction of the life that God called good.

Over and above the foolish stewardship of land and resources, yet closely allied to it, is the crisis of values, and of spirituality; a twisted and self-deceptive view of ‘profit’. The whole Christian family now has an unprecedented opportunity and calling: to bring together mission, justice, stewardship, and study: to bring out of our ‘treasure’ the determinative priorities and values that are so different from those piloting Creation towards catastrophe. And above all, to take note of, and act on, and trust in, the worth we are given (each and all of us) in Christ. The worth and encouragement we may give to our neighbour, and our fellow creature, in partnership, rather than exploitation. May we cherish and be empowered by the knowledge of our enduring and transforming worth in the sight of God. Even if, until now, we have indeed pursued ‘worthless things’.

You can download all the resources as individual weeks or as a complete set.

Our writers are drawn from a variety of  church backgrounds and pastoral contexts, so do not expect that they all speak with one voice or perspective. We all share, as Pope Francis as said, a ‘Common Home’, and offer this work in trust that there is no one whose contribution is not vital to the healing  partnership of Christ with God’s Creation.  The God of the Bible’s tendency, observable in these readings, to ‘bring the baddies on board’ should steer us to a conciliatory approach, rather than a blame-game, fruitless denial of the crisis, or a complacent acceptance of the principles, whilst reserving exceptions for ourselves.  The bottom line, is the love for your neighbour, as yourself. 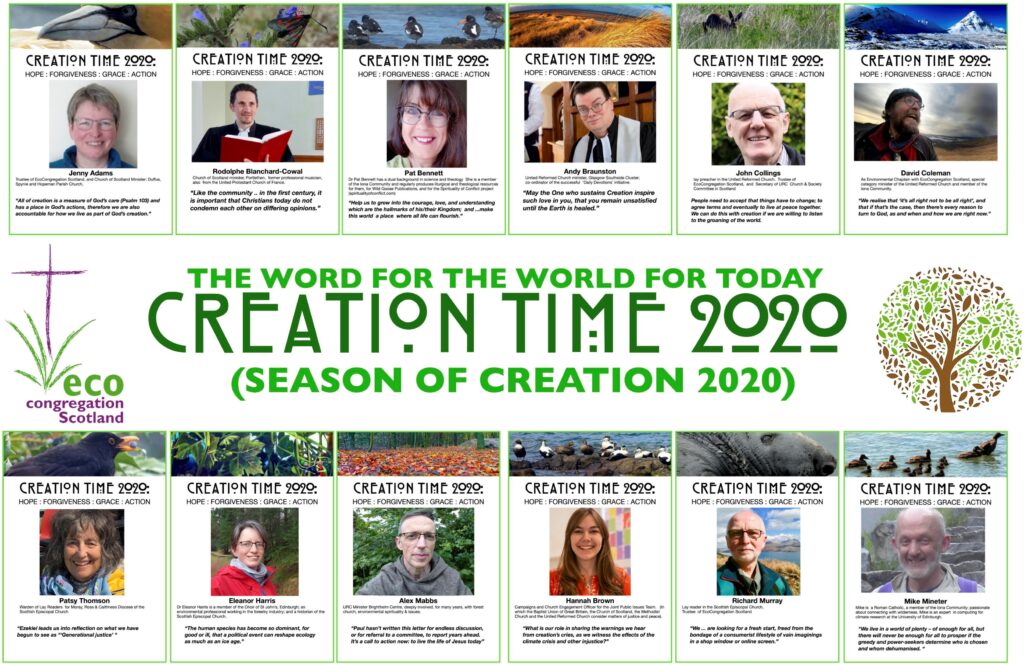 Rev David Coleman is Environmental Chaplain for Eco-Congregation Scotland, an ordained minister of  the United Reformed Church and is a member of the Iona Community. It is part of his role as Eco-Chaplain to co-ordinate the Creation Time writing group, who all contributed voluntarily. We are tremendously grateful for this commitment, and for the variety and integrity of approaches as we read the Bible in a declared age of climate emergency. We worked together with ‘Weekly Worship’ in the Church of Scotland and this year once more used the Revised Common Lectionary Readings for our reflection.

Rev Jenny Adams is Church of Scotland Minister at Duffus, Spynie and Hopeman Parish and a Trustee of Eco-Congregation Scotland.

Rev Rodolphe Blanchard-Cowal is Portlethen Church of Scotland Minister, a former professional musician and from the United Protestant Church of France.

Dr Pat Bennett has a dual background in science and theology and a particular interest in the connections between relational experience, health, and flourishing; as a member of the Iona Community she regularly produces liturgical and theological resources for them, Wild Goose Publications and the Spirituality of Conflict project.

Rev Andy Braunston is a United Reformed Church for the Glasgow Southside cluster and co-ordinator of the successful Daily Devotions initiative.

Richard Murray is a Lay Reader in the Scottish Episcopal Church and a member of its Church in Society Committee, where he has a focus on environmental issues. He is a trustee of Eco- Congregation Scotland.

John Collings is a lay preacher in the United Reformed Church, Trustee of Eco-Congregation Scotland and Secretary of the URC Church and Society Committee in Scotland.

Patsy Thomson is Warden of Lay Readers for Moray, Ross and Caithness Diocese of the Scottish Episcopal Church.

Dr Eleanor Harris is a member of the Choir of St John’s, Edinburgh; an environmental professional working in the forestry industry and a historian of the Scottish Episcopal Church.

Hannah Brown is Campaigns and Church Engagement Officer for the Joint Public Issues Team in which the Methodist Church, Church of Scotland, United Reformed Church and Baptist Union of Great Britain consider matters of justice and peace.

Mike Mineter is a Roman Catholic, a member of the Iona Community passionate about connecting with wilderness and an expert in computing for climate research at the University of Edinburgh.