September has been a very busy month for Skene Parish. The month began with Communion at both Churches on the 6th and 13th. Small candles in jars, made completely from recycled materials were handed out to the congregation at the Communion Services at Skene and Trinity Churches at the start of the Stewardship of Creation Season.  These were all made and packaged by the Eco Group.  The themes for these two Sundays were The Creator Inspires and The Creation Inspires.

On the 19th September the church joined with the Action Group to hold a Coffee Morning and Eco Group Display.  Both were most successful.  At this event, Sheila Gray was presented, by Councillor Iris Walker, with Skene Parish Church’s Third Eco Award.  The Congregation has worked very hard to achieve this status and are indeed only the eighth church in Scotland to receive this award. They are very excited about moving on to the Continuing Award and looking towards a new project in which to be involved.

At this event, the church had the launch of the very exciting new community project – The Skene Community Garden Project.  Over 70 attended the presentation and many there, pledged their support.

The next day, a Onesie Sunday was held.  Members of the congregation and the children wore their Onsies to Church to show support of our Mission Partners in Malawi and to raise funds for the work they do at the Nkhoma Hospital.  As part of the Eco Congregation Initiative,  the theme was The Stewards Care.

As the last event in the Stewardship Month, the Eco Congregation Scotland Climate Change Baton came to Skene.  Arriving from Lerwick in Shetland, the baton was carried round Skene Church in the morning at the Harvest Thanksgiving Service. It was then cared for by members of Jigsaw and they brought it to Messy Harvest at Trinity Church in the afternoon where the children and their parents formed a human chain around the building, passing the baton from one to another.  The baton was then sent on its way around Scotland, this time to Mauchline Church in East Ayrshire.  The theme for this service was All Creatures Great and Small. 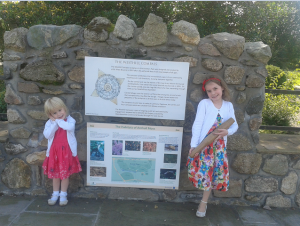 Baton goes on a trip round Westhill with Malia and Poppy.

The church is now gathering photographs of creation from the congregation to shortlist to 12 for their WOW Factor Calendar 2016. This is a great way to end their Stewardship Season with something to remind them throughout next year about God’s amazing creation.