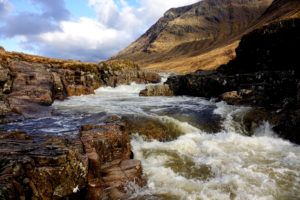 “Hey, Father, will you bless this for us?”

I had come, for peace and quiet,  up the road on my bike,  to the ancient Holy Well of St Gwenfrewi ‘ at Holywell/Treffynnon, ‘the Lourdes of Wales’, cared for for the whole church, at that time, by a small, hospitable,  group of Catholic sisters.( Maybe Lourdes is the Treffynnon of France!  But I haven’t got there…. yet!).

Perhaps back then I was far too cautious, and had not, as a hymn-writer friend recommended, immersed myself in the icy waters, even though I had been impressed with the Spirituality of Ann Griffiths, the Creation-aware Calvinist poet who had described prayer as “swimming in God”.  I touched the water. I tasted it; enjoyed the quiet wet noises and the ancient stonework.

I hadn’t known what to make, back then,  of a member of my congregation who had been involved in the piping and channelling to make sure that the Well remained a well, and thus held the firm but regrettable opinion that such enabling engineering work would have banished any imagined holiness proper to a “natural” spring.

I might have reminded him, nowadays, of the holiness of all water, and indeed, of his own labour, in facilitating a beautiful, ancient, place of prayer, but it takes a few years after the (unintentionally) stifling trauma of college and assessments, before you can begin to say what really needs to be said.

Some of us never escape.

Though now I’m in a double bind, because, all the more, to do this job, I have to stick my neck out. And encourage others – even those in training – in the recklessly responsible discipline of meaning what you say. Which is the last thing in the world our culture expects of harmless people of faith like you, dear reader!

And it’s sometimes the last thing the Church expects, even of its leaders.

I had chained my bike, with the baby-seat  prominently visible, to the railings. The staff knew very well who I was, and in fact, I went on, soon after, to organise an ecumenical  bike pilgrimage [which would be a great eco-idea now?] with Holywell as a destination, and worship in the largely disused historic chapel. We got on well.

Duty and the diary persuading me I’d spent  sufficient time with the water, I walked back, in black shirt and clerical collar, through the souvenir area, which was where the eager pilgrims caught me.

The staff suppressed a giggle, and looked away:

“Hey, Father, will you bless this for us?”

I’m fairly sure one of the items was a ‘St Christopher’, an item of significance in folk spirituality well beyond the bounds of the Catholic Church. But just as, when Princess Diana was killed, I was  asked to do “something  creative”, but it took place in the Catholic church ‘because they had candles’,  this was a time when the faith of the people was more important than the brand of the clergy.

So I did what was asked, with integrity, asking that God might remind us, through the items they had bought, and  as we travel, of the holiness of water, the roads we travel, and  the places we pause to pray.

The pilgrims  went away satisfied. I climbed back onto my bike with the baby-seat a few minutes later.

North Wales was like that. When my son was born, an RC neighbour stopped his car over the road, wound down the window  and yelled “I suppose we’ll have to call you ‘Father’ now!”. The Fflint Catholic Club gave me a farewell  party when I left.

It’s  a humbling irony that,  being an incurable  and maybe slightly smug non-driver for most of my ministry, I now cover some substantial distances as a ‘travelling salesman’ of the Green Gospel .

Three years ago, after my wife's death, driving was a bizarre new experience, requiring next to no physical effort, but intense alertness.

My reward is that  I rejoice in the changing scenery [LINKS FOLLOW ]  (Glencoe, the Drumochter Pass, and the Dalveen  Pass, Glenshee and, of course, the road across Mull,  have been highlights.) “Travelling mercies” are part of my daily prayer, and I much appreciate being upheld in that way. I encounter graciousness ( as in those experienced with the etiquette of Scotland’s single track roads) and of course, I encounter  entitlement,  boorishness and impatience, all  amplified by powerful engines. (The selfish expression of power, via the accelerator, burns more fuel.).

As yet, though, no ‘sacred’ items (other than those I travel with directly to lead worship) accompany me.  But the Earth itself is sacred.

Maybe that’s why, returning by train  (phew) from  study leave in Germany, I was ambushed by St Christopher.

With three hours to change trains in Cologne, I made my way to the rather wonderful cathedral there. Revisiting the shrine of those wise travellers, the ‘Holy Three Kings’…

When I saw a great figure looming out from one of the pillars. He looked rather rustic, with a touch of Father Christmas.  But perched, like Timon on Pumbaa’s back, was the figure of a small child. The genius of the statue was, the closer you looked, the harder a time Christopher seemed to be having.

“Carrying all the weight of the world on his shoulders”

…came to mind. I checked the Catholic Encyclopedia and other easily accessible sites on my phone. You  can do likewise.

What spoke to me  there was the adoption of Christopher as a patron saint for “motorists.”

Driving  used to be  a morally neutral activity.  Though each time, now,  I turn the key, I needs must ask if it’s worth it. For now, perhaps,  in pursuit of change, but not indefinitely.

It was part of my journey, as I began this role,  to publish “a blessing for a new car”.  Maybe I need to revisit that, as time goes on.

The summarised stories of “Christopher”,  martyred for his faith around 251 ad  told of someone who took up on the “easy” job of transporting the [Christ]-child across a torrential  river.

Like those of us who drive.  It’s easy, effortless by comparison with walking or cycling.  But perhaps in the awareness of the Climate Crisis, we’re becoming more aware of the “weight of the whole world”  pressing down in the midst  of what seems harmless and straightforward.

Recently publicised revelations about the cobalt in batteries for electric vehicles  offer us slender  respite.

I am one of you. Today, and next week,  I travel on your behalf.  Together, and sooner than we might like or expect,  we ( including me) need to embrace, not just  new ways of doing exactly the same things, but new ways altogether.

I wonder what Christopher had to let go of, to reach the far bank?

For me, now, the story of Christopher, who, in the midst of the river, feared he might drown, offers  a companion in the transition  we face before we can “get to the other side” .

We’re in the river of change. ( Swimming, perhaps, in God?) . And we need to come to feel both the weight of what we carry,  the burden of the planet’s  life, and the importance of Who comes with us, and Who it is, who sees us through.